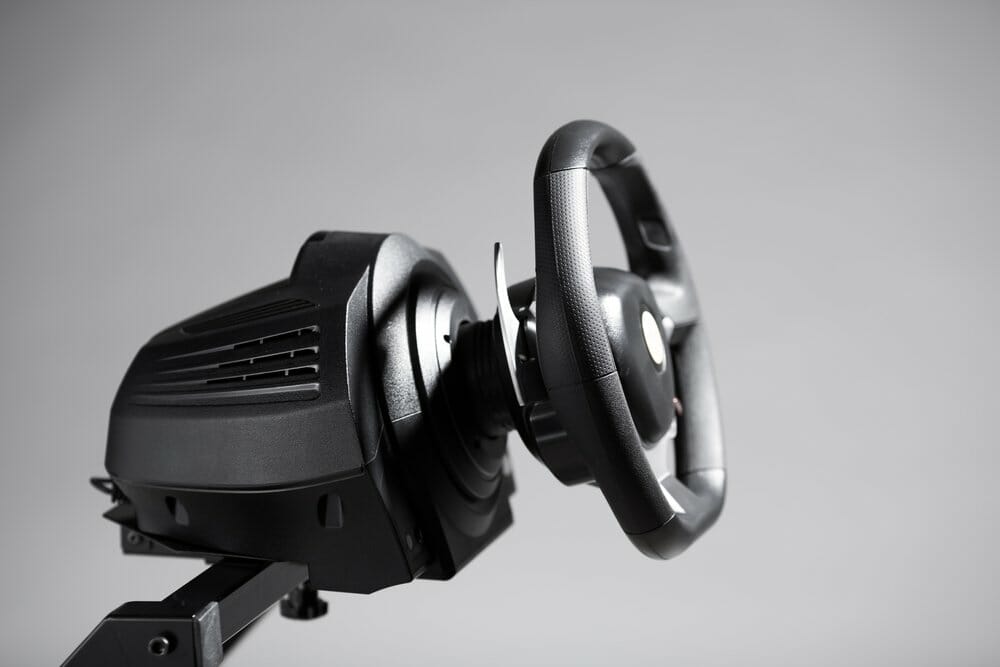 If you plan on truly optimizing the ergonomics of your simulator space, then consider purchasing a good wheel stand. Following some thorough research, we’ve compiled a list of 2020’s best wheel stands. 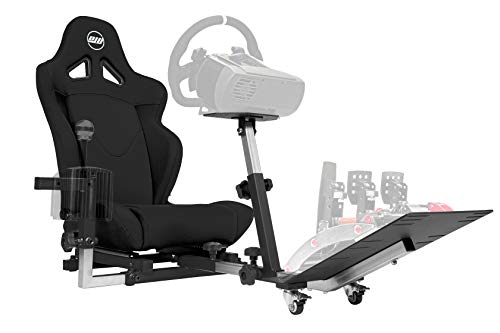 The Openwheeler GEN2 is a highly optimized, adjustable, and good looking wheel stand that will leave you unquestionably satisfied.

If you’re not afraid to splurge a little, then the Openwheeler GEN2 is an excellent option. You can customize (and hence optimize) the distance between the seat, pedalboard, and wheel stand, the seat has a reclining back, there are multiple positions for mounted pedals, and the wheel stand itself has various adjustable angles, allowing you to position the wheel however you prefer. For those who prefer to drive with the shifter on the left, the Openwheeler accommodates that too!

Other than the basic wheelstand, this set comes with a comfortable seat and all the tools you’ll need to set it up (which is both welcome and uncommon). If you’re looking for a set that will give you everything with flying colors, then you’ve found it! It looks good, feels good, and can be customized. After setting this up and racing in it for the first time you’ll notice just how much it adds to the authenticity of the game. 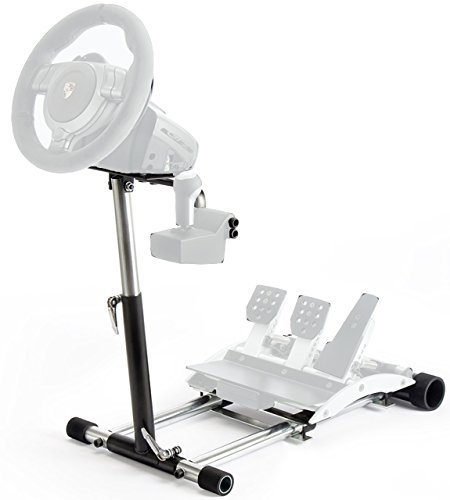 They cost considerably less than the top pick, but don’t let that fool you — these European-made stands can be an incredible purchase

This may not look as fancy as the Openwheeler, and in many cases, it’s not, but it makes that up in spades with its practicality. The Pro-Line Wheel Stand stands have some of the most sturdy build qualities out there, meaning that it will almost certainly last you a lifetime. It’s also quite customizable, with options to change the inclines of various portions of it, choosing whether to place the shifter on the left or right, changing pedal location and more.

This last note is the most important one out there: different models work with different wheels.

The Pro G is made for the Logitech G29/290, G27, and G25. If you’re looking for a stand for those wheels stop here. It’ll be hard to find anything that matches the quality for money that you’d get with this stand. 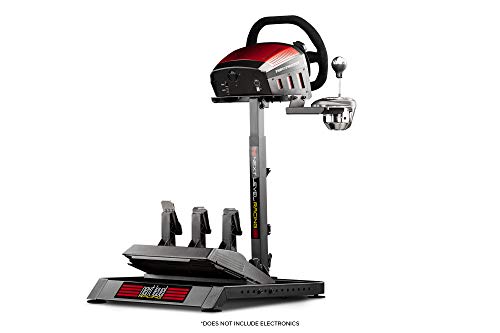 Great for those looking for a comprehensive but storable option, the NLR Wheel Stand Lite will often be the right choice for those searching for an all-around safe bet

Next Level Racing produces a variety of great stands, but we chose the Next Level Racing Lite as most worthy of the bronze medal. It has the portability of the “Racer” while also keeping the best features of the “Normal” wheel stand.

It’s easily and widely adjustable, from the pedal plate to the wheel, it’s shifter-compatible (which the “Racer” is not) and it can easily be upgraded into a full cockpit should you ever choose to go down that road. Moreover, unlike the Wheel Stand Pro line, the NLR Wheel Stand is not machine-specific, meaning that should you wish to change wheel as time goes on, you won’t have to make another purchase. Finally, it is also really easy to fold and store, which can be done in round-about 10 seconds.

Definitively worth considering should you wish for a portable, great and versatile stand to last you for the future. 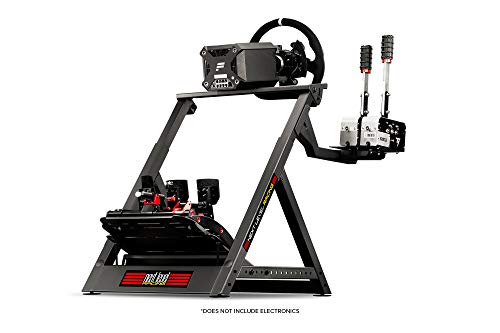 This stand is set to hit the market soon, and it promises to focus on being the best direct-drive stand there is.

A caveat: the Next Level Racing Wheel Stand DD is not out yet. That being said, from the specs we’ve seen so far, this stand is set to take the world by storm. Especially if you’re a fan of either Thrustmaster or Fanatec products. The biggest draw to it is the compatibility with direct-drive wheels. As such this promises to be the most sturdy stand yet on the market, as it will have to withstand the strength of direct drive wheels. It’ll be made (or at least parts of it) in laser-cut carbon steel, meaning that you will be able to brake as hard as your heart desires without risking to move the stand.

It also supports adding both a shifter and handbrake at the same time and on both sides, tons of adjustability, and its plates come pre-drilled for Thrustmaster and Fanatec peripherals. 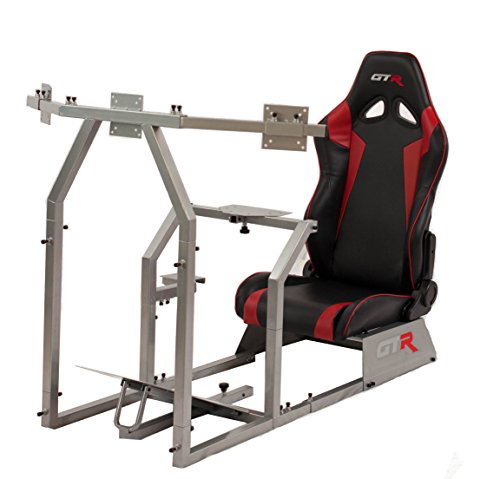 For those looking for a wheelstand that’s pre-built to support a triple monitor set-up, the GTA-F is an excellent choice.

Playing with three monitors compared to one can add to the realism of the game in a myriad of ways. For those who have tried and tested this set-up and don’t want to return to a single monitor, the GTR Simulator GTAF-S GTA-F Model is a great solution.

A powerful and resistant steel build coupled with a comfortable synthetic leather chair immediately give you the impression of a high-quality rig, and it doesn’t disappoint. The various powder-coated frames will keep your peripherals in place, and the rig steady. It’s adjustable, it’s sturdy, it’s good looking and most important of all: it’s built keeping serious racing sim users in mind.

This stand isn’t something to purchase if you’re looking for a gift for a casual fan, but more for those who cherish investing time and passion into racing simulators. 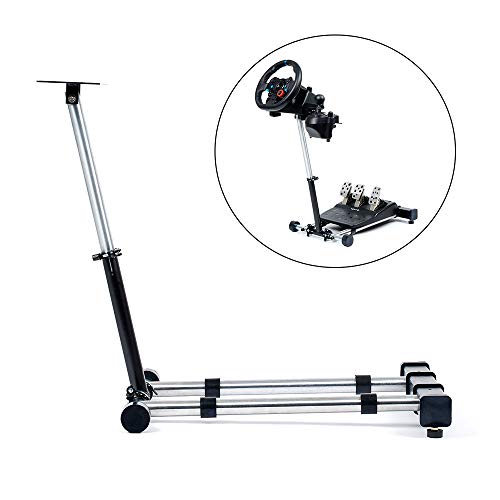 A very respectable stand that focuses more on the Logitech Wheels, the ZIOSTAND will have most budget customers very happy with their purchase.

Of course, whenever you look for a budget price it’s hard to compare it to the market leaders, but the ZIOSTAND Racing Steering Wheel Stand doesn’t shy away from giving you a competitive product. The stand itself is stable, portable, and adjustable. You can adjust wheel tilt up to 360°, as well as height and distance from the driver. You can select which side you would like your shifter to be on, and pedal locations can also be customized.

Another great aspect of it is its portability. Whether you need to move it around, or simply lack the real-estate in your room to constantly have a wheel stand open, the ZIOSTAND is fully articulated. This means that it is relatively simple to fold down, making storing it quite simple.

What to Look for In a Wheel Stand

The most important things to look for in a wheel stand are: customization, build quality and compatibility. We’ll go over each step by step, but it’s always best to keep them in mind when deciding whether any specific product is right for you.

Customization is important because, inherently, we all have different builds. Whether you may be on the taller or shorter side, whether you’re very thin or a bit wider than others, it’s important that the stand provides you specifically the best experience you could have. As such you need to be able to regulate the small things like the distance between your hands and the wheel, the angle at which the wheel is at, whether the shifter is on the left or right and other things to truly get the most out of your wheel stand.

Build quality is important for multiple reasons. The first is the longevity of the item you purchase. You don’t want to spend your hard-earnt money for the stand to break after a couple of weeks. Similarly, you need a stand that actually stays in place. If, when you push on the pedals, the stand shifts, it’s no good. It will not only make your driving experience frustrating but will also take you out of the game. Which is our last point here: immersion. Having a good quality stand will add to your immersion, as you’ll feel as though you’re inside the vehicle you’re driving. F1 cars don’t feel cheap, your setup shouldn’t either.

Certain stands have pre-made holes to facilitate compatibility. These won’t always preclude the possibility of using a wheel that’s not meant for that specific stand, but the risk is that you’ll lose the stand’s effectiveness. As such it’s always a great idea to triple-check that your wheel and stand are compatible before making any purchase.

link to The Best VR Headsets For DCS

If you are looking to buy a new VR headset to enjoy a more immersive gameplay in Digital Combat Simulator (DCS), then this article is here to help you. Below you will find some of the best VR...

Continue Reading
link to The Best VR Headsets Under $500

If you are looking to buy a new VR headset, or simply upgrade your old one, without spending a fortune, then this guide is for you. Below you will find some of the best VR headsets under $500 that...