The Thrustmaster TMX and the Thrustmaster T150 are the French peripheral manufacturer’s current entry-level force feedback sim racing wheels for the Xbox and PlayStation console lines, respectively. These wheels exist in an exceedingly competitive tier of racing racing peripherals, going up against the likes of Logitech, Hori and others. While these two Thrustmaster wheels exist at the same price point and feature a nearly-identical feature set – as do the available “Pro” versions of each wheel that come packaged with upgraded T3PA pedals – they mostly avoid directly competing against one another due to being primarily designed for different platforms.

While we feel as if the Thrustmaster TMX is a slightly better product, the Thrustmaster T150 is a great wheel at a great price and will naturally be a better purchase for many. Today, we’ll be comparing these two wheels’ specs as well as reviewing insights gleaned from the sim racing community at large – who have had hands-on with these products for years now. 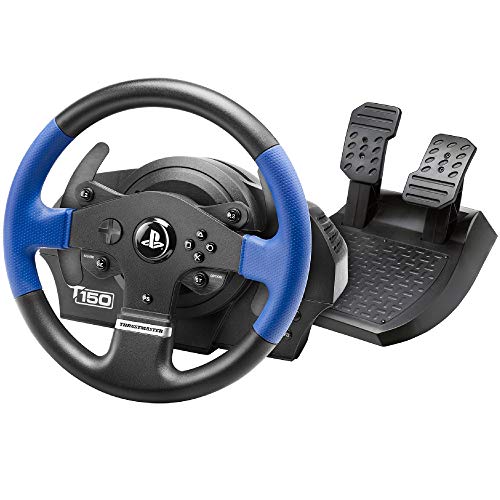 Thrustmaster T150
Which wheel you choose will ultimately depend on which console you use, but if you
Check Price on Amazon

If you place the Thrustmaster TMX and Thrustmaster T150 side-by-side, you’ll immediately notice that they appear to be more identical than not. Upon further inspection, it’s apparent that most of the internal and external components are in fact identical – and this extends to the build quality as well.

Both sim racing wheels feature wheel bases that house the internals in a plastic shell that can be mounted to a desk or table easily with the included hardware. Both wheels feature solid-feeling wheels that are constructed of a metal core and wrapped in plastic and rubbery grips.

One design choice that often spells disaster for budget steering wheels is plastic paddle shifters. Although Thrustmaster did go with plastic shifters, the pair included with each racing wheel is well made and sturdy. Same goes for the included pedal set which, despite failing to include a clutch pedal, is a solid value add here.

Neither steering wheel set has any sort of serious quality control issues, as is evidenced by the fact that these wheels have both been manufactured for a number of years to this point without any sort of redesigns or widespread issues that would preclude the mass consumption they continue to enjoy to this day.

As mentioned above, the included pedal set may rub some the wrong way as it is constructed primarily of plastic and lacking a clutch pedal. Despite these missteps, Thrustmaster manages to somewhat justify the addition of the pedals by allowing for some adjustability of the brake pedal and creating a generally acceptable experience for entry-level sim racers.

Neither of these wheels or their pedal sets look or feel premium by any stretch of the imagination, but they do a solid job of meeting the needs of game who wants to have a solid, immersive sim racing experience without dropping a ton of cash.

We will give the TMX a slight edge in the design category as the blue grips give the T150 a less-classy appearance, especially when paired with a new PlayStation 5.

As with so many other things about these two racing wheels, the force feedback experience is nearly identical. Each steering wheel base houses a mixed system consisting both of gears and belts & pulleys, which results in a smoother feedback experience than one would expect from a gear-based system while also keeping prices down.

While sim racing enthusiasts will find the peak torque of 2Nm that these force feedback systems output to be less than impressive, the average gamer will find the pull to be more than adequate for their needs. Note that there is no resistance or feedback for braking with these pedals, as is to be expected given the price tag.

While not a big deal to us, it is worth noting that the increased rotation range of the T150 may translate to an overall higher level of fidelity and smoothness in the feel of the wheel’s force feedback. A minor note indeed, but with wheels that are so similar we need to focus on some of the smaller details in order to differentiate between them.

As you have likely gathered by now, the pedal set included with these racing wheels is identical and underwhelming. While the pedal set is arguably the weakest element of this package, they are nonetheless fit for purpose and represent a solid value add for most gamers who would be looking at a budget racing wheel, anyway.

Each pedal set can be adjusted to one of three positions; the differences between the positions are not dramatic but the option is nice for those who want to get the most comfort and control possible. The all-plastic shell and pads are sturdier than they look, and there is enough metal in the internals and moving parts that the pedal set does stand up to time and abuse surprisingly well.

There is no aesthetic or functional difference between the pedal set included with either wheel, and the Pro versions of each wheel replace the two-pedal set with the Thrustmaster T3PA set – featuring a clutch pedal and all-metal construction, we think that the additional cost is justifiable for most sim racers and borderline mandatory for anyone who intends to race competitively in sims. Note that you can buy the T3PA pedal set separately later on, but it will wind up costing you much more than if you would have just opted for them in the beginning.

Racing wheels in this price range have historically suffered from a number of drawbacks and tradeoffs, and one way in which they typically fall short is noise. Thankfully, the Thrustmaster TMX and Thrustmaster T150 are relatively quiet – but not to the degree you might expect if you’re coming from a more premium pedal.

The force feedback system is the primary source of noise, emitting rumbles and bumps as it relays feedback and torques the wheel rim. The best way to reduce this output is to firmly mount the wheel so that it isn’t able to move itself or the thing it is mounted upon. The heft of the wheel does a lot to help in this regard and as we said above, the wheel is relatively quiet when considering the price tag and materials involved here.

All things considered, the sound output of racing wheels is only really a major consideration when compared against another, and even then usually only when one is obnoxiously loud or impressively quiet. Ultimately, neither wheel stands out in comparison, so this category must end in a draw for better or for worse.

Thrustmaster TMX vs T150: Other Considerations

Considering the intended use case and use potential for each of these racing wheels, it is probably fair to say that they are amongst the best options for gamers on their respective consoles and less-ideal for PC gamers who have more options and a wider array of racing sims to use the wheel with.

On the other hand, neither wheel has any major flaws (aside from arguably the pedals) and there really isn’t much else on the market at this price point that we can say that about. Furthermore, PC gamers are probably the only consumers who would be seriously considering which of these wheels is a better purchase – which is incidentally the target audience for an article such as this one!

One final consideration is a subject that may be gnawing at those looking at the age of these two racing wheels – deprecation. As mentioned above, these wheels have been on the market for quite some time and are probably due for a refresh. New iterations will likely feature improved specs and additional functionality for the new consoles and may not work with the older ones. At any rate, we would not advise against these wheels if you’re in the market for a racing wheel right now – as the new ones will likely cost considerably more while only providing a marginally better experience.

Thrustmaster vs. the competition

The primary alternative to these wheels would be those made by Logitech – The Logitech G920 for Xbox consoles and the Logitech G29 for PlayStation. These sim racing wheels are decidedly higher-quality in construction than the Thrustmaster wheels we’ve been comparing today, and they feature improved force feedback and dramatically better pedals.

If you’re considering purchasing one these Thrustmaster wheels but don’t necessarily have an affinity for the company and just want a great sim racing experience at a great price, we highly recommend buying a G920 or G29 from Logitech instead – but not at MSRP! After all, they aren’t quite worth double the price of the TMX or T150.

Also note that both of these wheels do work with PC in addition to consoles, and you can’t really go wrong with either as they’re nearly identical in much the same ways that the Thrustmaster pair are.

There is of course other competition in the console racing wheel scene, such as wheels from Hori, Mad Catz, Fanatec and others, but we find that Thrustmaster and Logitech make affordable wheels that represent the best value for most.

If you are looking for a console or PC steering wheel that spares little or no expense in providing the best experience possible, we would advise you to look at Fanatec’s range of high-end gear.