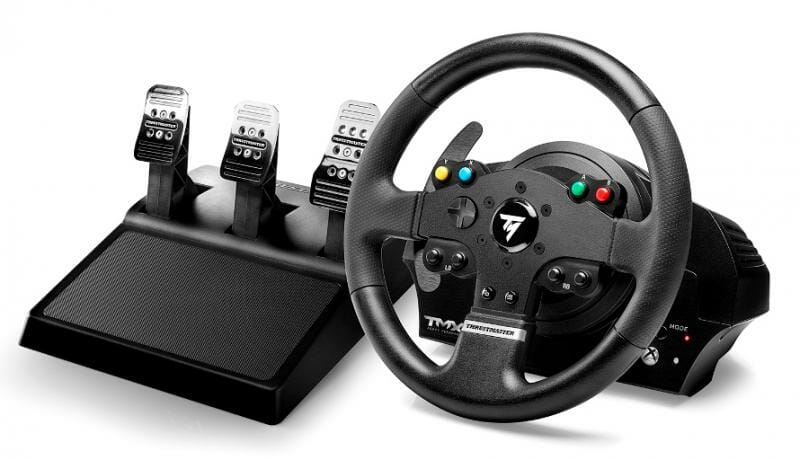 Both the Thrustmaster TMX Pro and Logitech G920 are excellent entry-level steering wheels for PC and Xbox One, but which of the two is the better choice?

We think the Thrustmaster TMX Pro is the better steering wheel. It delivers similar force feedback to the G920, but comes with far superior pedals that can detect up to 4,096 unique positions. The G920, however, boasts better build quality and aesthetics. Thrustmaster TMX Pro
This Thrustmaster wheel comes with a significantly better set of pedals than the Logitech, making it our winner
Check Price on Amazon

The Logitech G920 does take the lead in the build quality department. The steel wheel feels sturdy, with a leather cover for improved grip and luxury. The TMX Pro does not reach these levels of material quality. The wheel itself is mostly made out of resistant plastic, and has rubber grips at the 2 o’clock and 10 o’clock positions to help you hold on. While the material isn’t bad, it simply does not reach the quality that the G920 does. This is a clear win for the Logitech.

Inherently tied to the build quality, it should thus come to no surprise that the G920 wins in this department as well. It is simply stunning, mixing great design with excellent ergonomics. The Thrustmaster really doesn’t look as good. The plastic used for the wheel plays a big role in this. One design advantage that it does have against the Logitech is that the TMX is slightly larger, which most racing sim fans will appreciate.

Force feedback is where the Thrustmaster wins, hands down. The Logitech uses a gear-driven mechanism, which can make the “wheel” feel notchy. The Thrustmaster, however, uses a mix between a belt- and gear-driven mechanism, and the jump in quality is noticeable. The steering will feel a lot smoother, as will the feedback you’ll get from the game. The TMX Pro may cut some corners in its aspect or build quality, but it pulls all the stops as a starter wheel for force feedback, which is what makes it the uncontested winner for us.

The Logitech G920 wins on reliability, but not by much. The advantage of using a gear system is a lower failure rate compared to a belt system. It should be noted that neither of these two wheels have a high failure rate at all. One thing to note is that you will, however, have a one year warranty period on the Thrustmaster, allowing you to sleep easily.

Both wheels are relatively quiet. That being said the TMX is a tad better than the G920 in this department. The metal ball axle makes it so that there’s no rattling noise or feel. On the other hand, the Logitech wheel may make some knocking noises from time to time. The TMX also has no cooling fan, which avoids a potential increase in noise levels.

It’s very hard to declare an outright winner here. The TMX pedals are a lot more precise. They’re 12 bit and register up to 4,096 different positions. When racing, especially in games such as F1, this will be invaluable as breaking will need to be incredibly accurate at higher difficulties. The G920 pedals do not match this level of accuracy. They are 8 bit and offer up to 256 registerable positions, a notable downgrade from the TMX. That being said, they are a lot sturdier, grip both your foot as well as the floor considerably better, and look much nicer. If you are looking for precision in pedals, then that’s another reason to go with the TMX.

Alternatively, consider buying a separate set of pedals for whichever wheel you prefer.

The most important peripheral other than a set of pedals is definitely the shifter. Both of these wheels have optional shifters that you can buy separately. If you want a less expensive option, be sure to go with the Logitech bundle.

The Thrustmaster shifter (there are many, but we’re currently talking about the TH8A) is one of the best on the market. It feels like it’s been ripped straight out of a real car, with fantastic build quality. It also has the option to become a sequential shifter, like the T-LCM (our favorite handbrake). This excellent H-shifter also makes a reasonable sim racing handbrake if you're in a pinch!

Simply put: for an economic option go with the Logitech wheel + pedals + shifter bundle. For the high quality option add the TH8A to your purchase. The Thrustmaster wheel is cheaper than the Logitech one, so you’ll end up spending around the same overall, but end up with an undeniably better shifter.

As mentioned before, we recommend the Thrustmaster TMX Pro over the G920. This is due to the more immersive force feedback, the lower price tag, and higher level of precision the pedals give you.

Thrustmaster TMX Pro
This Thrustmaster wheel comes with a significantly better set of pedals than the Logitech, making it our winner
Check Price on Amazon

That is not to say that the Logitech G920 is not a great wheel. It will still provide great immersion, and the build quality (not only of the wheel but of the pedals too) will do quite a lot for you.