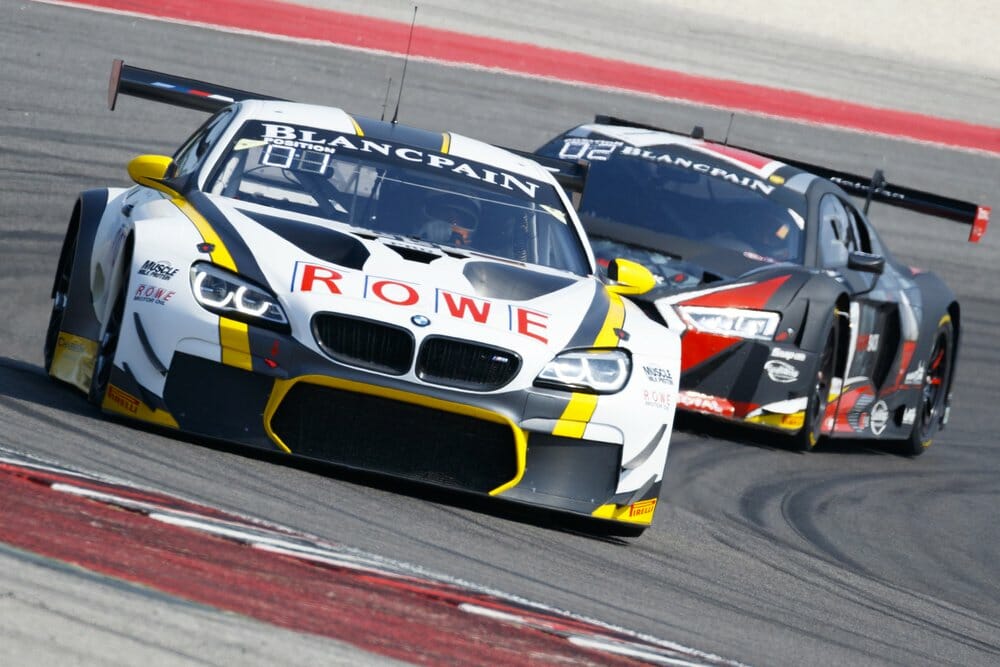 If you just finished your sim setup, chances are you’d like to start burning rubber as soon as possible. In this list we’ve compiled the best seven racing sims games available. We looked at various aspects: realism, fun, aesthetics (sound and graphics) and cost. All the titles below are phenomenal, and we’ll do our best to help you tailor pick what you’re looking for!

An incontrovertible staple of the racing sim community, updates continue to make rf2 a top choice

rFactor2 came out in 2013, but the fact that it remains at the top of many (including ours) lists is a testament to its greatness. A large part of this is the tyre modelling. The level of detail in the simulation of the tyres will give you unparalleled immersion as you see and feel them flex differently depending on how you take your turns. Speaking of which, the game has excellent support for VR headsets.

As you’ll progress through the race a rubber-line will form on the circuit, darker in sharper corners, mirroring reality. The fact that seven years after the release it is still receiving love and attention from the developing team in the form of patches means that rf2 withstands the test of time admirably.

Other than the negative related to the cost, the damage is the only other thing we feel rf2 doesn’t do great at. If you crash your car will still damage its suspensions, engine etc, but it won’t crumple. Even if you’re going at 300km/h straight into a wall. For a sim game which does everything else so well, this does detract from the immersion.

Assetto Corsa will be a very big hit or miss depending on your personal preference. Some have found it to have the most realistic physics in any racing game yet. Others say the physics are average. Unfortunately this is simply a matter of what the player likes. That being said, if you plan on taking your racing online, then Assetto Corsa will be an incredible experience. It has one of the biggest online communities of sim drivers there, so finding matches will be easy, and the laser scanned tracks will give you a dopamine rush as the realistic grittiness, bumps and small holes will make your driving experience that much more immersive. Force feedback in this game is especially noteworthy, with the developers going above and beyond to make you feel every little thing a driver would. Admittedly the sounds are not the best, and the offline modes are not as enticing as some in other games on this list, but Assetto Corsa remains a great sim experience for many out there.

Although not as good-looking as other entries, Automobilista is one of the best single player experiences out there

If your interests lie in the online multiplayer aspects of racing sims, then automobilista is not for you. If, instead, your interests lie in challenging yourself and pushing your driving abilities to the limit, then Automobilista will play like a beauty. If you have a steering wheel which registers force feedback you’ll be taken aback at just how an incredible job automobilista does. You will push your car to the limit and it will push back. The fact that a lot of content, from cars to circuits, are included in the base price of the game can’t but be an excellent added bonus. The smallest yet perhaps most intriguing selling point (especially with regards to realism) is the difference in play-style between electronic systems, and older gearbox systems. If you plan on driving the same way for both you and your times will suffer. This is precisely the sort of small detail that gives credence to the realism a driving sim should try to achieve. The unfortunate negatives are that this game has older graphics, which will be harder to turn back to after some of the modern titles. It’s also quite hard to find multiplayer games.

For the Rally Enthusiasts, 2.0 will scratch every itch and more. Few games feel more authentic than this.

If you like rally — or just want to have some fun with your new handbrake — then Dirt Rally 2.0 is the sim for you. It’ll have you tweaking your driving style, settings, and mindset as you brave the difficult tracks. There is close to no tutorial so you will have to learn as you go, which will not be an easy task. In terms of off-road realism, there is no equal, though. 2.0 will have you sweating from exertion and stress as you listen to your navigator giving you very precise instructions on how to brave the road ahead.

All of this surrounded by beautiful visuals and with the purrs and roars of your engine. The adjustable AI difficulty is a godsend because you will lose. Any small mistake at higher difficulties will take a herculean amount of effort to recuperate. It’s precisely for this strenuous nature, the constant fight that you will have to put up, that Dirt Rally 2.0 is so high on our list.

The simulation aspect is hyper-detailed, meaning that you will have to learn how to drive with pinpoint accuracy. The tracks have character and replaying them will not feel repetitive, but rather a test of skill as you attempt to better yourself over and over again. The only issue we found is the necessity of an online connection for a lot of modes. If, however, you have that and love rallies, stop reading this list and go get the game.

The biggest online racing game out there, iRacing will put you to the test every time to hit the track

iRacing is a favourite racing sim for many people out there, and it’s easy to understand why. You will always find a game to join, the tracks are as accurate as any game has gotten them thus far, and the selection of cars and tracks is fantastic. Much like Assetto Corsa, there’s a debate between racing sim fans regarding the physics, but a large majority of players will swear by them. The graphics of this game are alright, nothing to write home about, but if you purchase it that’s not where your interests lie. iRacing is all about the race. It does an excellent job at punishing vile drivers (which most games are pretty awful at). Every time you hit the asphalt you will get in a high octane race, whether it be to cross the finish-line first, or to just barely make it in the point-zone. The reason why this game is not higher on the list is the incredibly punitive price tag. Although new members often get discounts, iRacing is a subscription based game, meaning that you will have to pay for it every month. You will also have to purchase cars and tracks to play with and on, adding to the expenses. Although this means that only very serious racing sim drivers will play it, we found the price to be too great to justify it being higher in our list.

Perhaps not the most accurate racing sim out there, Project Cars 2 will nonetheless have you giddily burn up your tires for hours

Project Cars 2 will have you feeling as though you’re in the driver’s seat, rushing at over 300km/h, with the roar of the engine accompanying the beautiful, fleeting landscape. The first person perspective of this game is such a treat words don’t do it justice. The best thing I can say about the game is that it plays more fun than how great it looks. Because while the visuals and audio will have you completely engrossed, your battles with the AI are what’s going to sell you. The fact that you can dial both their speed and aggression allows you to fine tune the exact level of difficulty that’s right for you. The problem with almost all sports/racing games is that on a higher difficulty you feel like you stand no chance, while on a lower one you’ll be winning with a 30 second gap between you and the AI. Project Cars however will keep you glued to the screen until the last corner. You won’t have time to process just how beautiful the environment is when you are one tenth of a second ahead with just three corners to go. It’s true that games such as rFactor2 and Assetto Corsa will have a more realistic simulation experience, but none will give you such well-rounded immersion like Project Cars 2.

A list of driving sim games could not be complete without the Codemasters classic, and the 2019 version is the best to date

Perhaps not all of us, but dare I say most of us, started sim racing because of Formula 1. We can safely say that, especially if you haven’t given the series a try for a while, it’s time to return to what started it all. F1 2019 is ambitious, it’s grand and, most importantly of all, it hits almost all the nails straight on the head. It’s needless to say that driving is incredibly fun, few games can rival what Codemasters have done. Getting into the rossa and finally consistently beat Mercedes is a reward in and of itself, but even if you aren’t partial to the Prancing Horse, you’ll have a great time here. Driving against the new AI will truly make you feel as though you’re battling the best drivers out there. For someone who is not as big a multiplayer fan as myself, the new and improved AI cannot be welcomed enough. If, however, you do prefer multiplayer then F1 2019 still has you covered. The sheer amount of new features is hard to include on such a short list, but it includes dedicated leagues, weekly GPs, multiplayer spec cars and more. Career mode is also great, fostering rivalries with two fantasy drivers, as you leap from F2 to the masterclass. The two main negative notes are the fact that Codemasters still needs to improve the incident tracking system, and that career mode had so much potential that feels underdeveloped. Still, this game is hard to pass on if you’ve ever dreamt of driving in Formula 1.