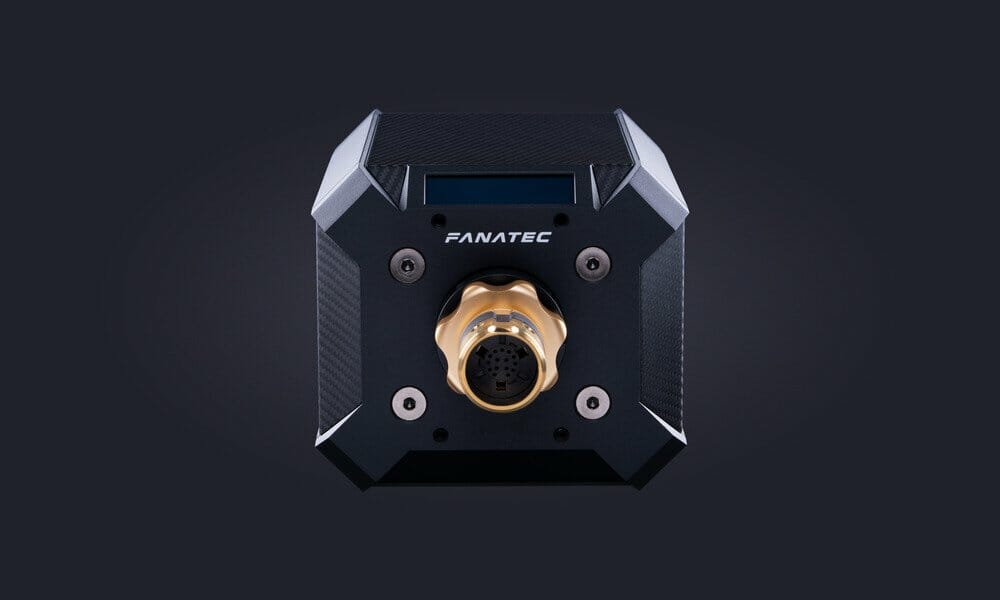 Direct-drive steering wheels are the ultimate experience in terms of simulation. They not only faithfully translate all your tiniest changes in wheel position to the sim game, but they convey to you unparalleled feedback. From the wetness of the track, to which tires are slightly more worn out, direct-drive sim racing wheels truly put you in the driver’s seat. Fanatec’s Podium DD2 is the updated formula to their incredibly successful DD1 wheel base. This review will examine whether the DD2 can stand tall as the DD1, or whether it crashes on the last turn. Fanatec DD2 Review: What to Expect

The Fanatec Podium DD2 is the Fanatec DD1’s older and slicker brother. It comes with all of the myriad positives and makes a few choice changes to really up the quality. Much like the Fanatec DD1, the DD2 also doesn’t come with an included wheel, rather furnishing you with only the wheel base. This will allow you to choose your preferred wheel (more on this in the “Features” section). Once again like the Fanatec DD1, compatibility remains select: plug and play on PC, Xbox One when paired with a compatible wheel rim. PlayStation users are left in the cold with the Fanatec Podium DD2 (and the DD1, for that matter – although a special Fanatec Podium F1 setup of the DD1 was released exclusively for PlayStation Consoles). When comparing it to the Accuforce V2 we might have to just barely favor the Accuforce. Both systems are phenomenal, and this should not be seen as an indictment of the Fanatec DD2, but the vast difference in price is simply not mirrored by a similar difference in quality.

It therefore goes without saying that the Fanatec Podium DD2 is a product aimed at expert racing sim pilots, and is likely not suited for beginners. This is both due to it being harder to race with more realistic settings, as well as the prohibitive price.

Here are the features and benefits of the DD2 worth knowing:

The Fanatec Podium DD2 achieves perhaps the most sublime levels of torque we have ever witnessed. With a peak torque level of 25Nm, it reproduces an identical level of torque output that you would face in most real race cars that utilize power steering. Even in the harshest racing conditions, the holding torque levels of the DD2 are never less than 18Nm. The tagline for this product, as seen in marketing materials and even on the product’s packaging is “Force Feedback Reinvented” – and the Fanatec DD2 delivers on that promise.

As per usual, each Fanatec products tend to be choosy with what peripherals you can attach to them. The DD2 (like the Fanatec DD1) only allows for Fanatec ClubSport and Fanatec CSL Steering Wheels to be mounted on it. That being said, as an improvement over the Fanatec DD1, the Podium DD2’s motor speed and acceleration does not suffer from heavy wheels. This means that if you have a favorite wheel which is slightly heavier than the norm, you have no reason to worry. The Fanatec DD2 is not a massive improvement over the DD1, but it’s a welcome one nonetheless.

What can be said about both Direct Drive Podium wheel bases series is that the build quality is sure to leave you in awe. The Podium DD2 has a direct drive motor optimized for racing simulator applications, and every little other bit is just as good. From the exchangeable brushed aluminum cover plates and aluminum coating, to the automotive-grade “Quick Release System” with rubber dampener for zero flex and movement between the steering wheel and wheelbase, you can tell that it’s an incredible machine. Weighing at a satisfying 13kg, the build quality of both the internal and external materials is impeccable.

It’s hard to talk about one without talking about the other. Let’s start by the rotation range. We can safely say that the DD2 has the largest rotation range of any wheel, direct drive, or not, on the market. This is because the rotation range is unlimited. If this wasn’t enough to convince you not only of the realism but the accuracy of the DD2, the ultra-fast 1000 Hz USB update rate means that you’ll experience as close to no input lag as you can imagine.

Needless to say, all these great features come at a cost. And it is not cheap. The Fanatec Podium DD2 costs a whole third more than the DD1 or the Accuforce V2. This is what causes this review to become complicated. Of course, the Fanatec Podium DD2 is a fantastic piece of equipment, it’s more than that, but is it worth so much money. We can’t answer that for you. At the end of the day, each person will have a differing opinion on the matter.

Every sim racer expects to see a power switch on their wheel base, but direct drive wheel base users find something unique on their product during setup – a kill switch. The DD1 and DD2 have this feature of course, and the DD2 technically has a second way of killing the torque after a recent firmware update – the power switch. The DD2 also requires use of a torque key in order to unlock the full potential of the motor, which is nice for users who have children or curious visitors.

Of course, there are a few great alternatives to this splendid direct drive wheel: If you want something more affordable, definitely consider this direct drive wheel base
Check Price on SimXperience

The AccuForce Pro V2 direct drive wheel base always makes an appearance in our considerations, and it’s clear to see why. The auto-optimization feature which causes the wheelbase to change its settings to best mirror your driving style, your driving line, what track you’re on, what car you’re using, how all these interacts is downright sci-fi worthy. And that’s just the tip of the iceberg. It’s one of the best direct-drive wheel choices out there and is considerably less expensive than the DD2. Although it
Check Price on Fanatec

The Fanatec Podium DD1 still performs admirably. It lacks perhaps some of the newer functions of the DD2, but the important stuff is almost unchanged. If you’re looking for a wheel base that is as close to the DD2 as possible, but cheaper, then this remains a safe bet. See our full comparison of these two Podium wheel bases for PC and Xbox One.

It’s redundant to say that the Fanatec Podium DD2 is one of the best products on the market. Everything it sets out to do, it does admirably. If you felt like your force-feedback wheel was simply not doing enough, then the DD2 will welcome you with open arms. It’s clear to see why Fanatec still remains a household name in racing sim circles.