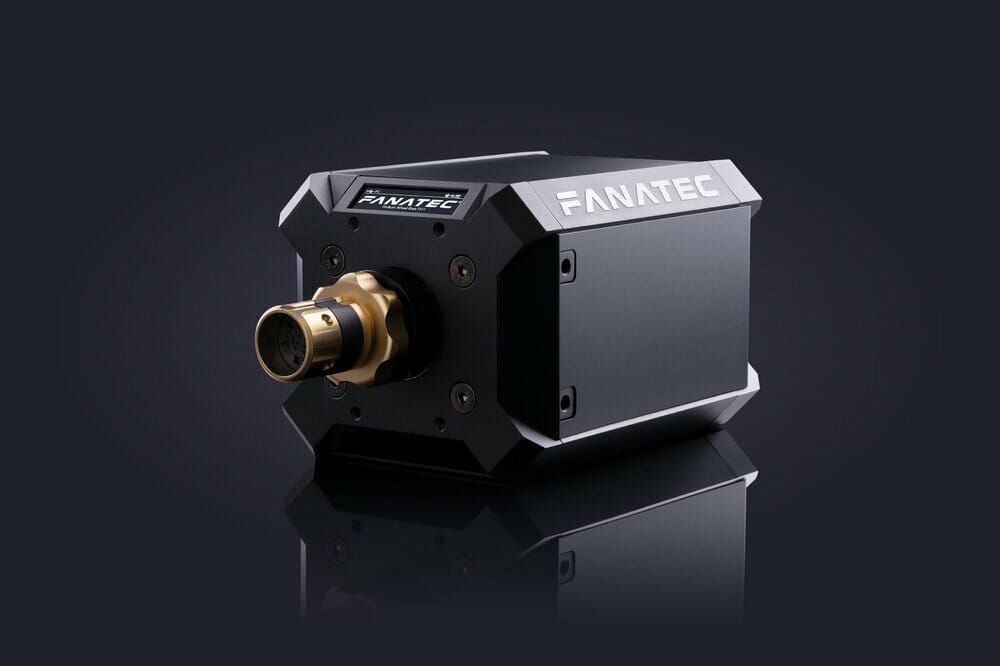 Upgrading from a controller to a force feedback steering wheel base provides an incredible jump in terms of both racing accuracy as well as immersion. Similarly, upgrading from a “normal” steering wheel base to a direct drive wheel base will have you feeling like you’ve abandoned a toy and stepped into a race car. More realistic, more precise, harder to master – a direct drive wheel base will truly take your sim racing experience to the next level.

This review will look at whether the Fanatec Podium DD1 is a direct drive wheel base you should consider purchasing for your sim racing rig. Fanatec Podium DD1
Fanatec has a reputation for high quality peripherals, so it
Check Price on Fanatec

Fanatec DD1 Review: What to Expect

The DD1 excels as not only as high-end home equipment, but serves as the heart of commercial simulation rigs as well. Real-life race car drivers and others use these ultra-realistic racing rigs to practice off-track in preparation for upcoming races and a plethora of other reasons.

The Fanatec Podium series has won a number of industry awards, and a search of any relevant website will reveal that the average Podium DD1 review lies somewhere between positive and glowing. Direct drive wheel bases are on the rise, largely thanks to the efforts of Fanatec and their Podium series.

Let’s review some of the major features and benefits of the Fanatec Podium DD1 direct drive wheel:

The Fanatec Podium DD1’s OLED display allows for incredible levels of data retrieval to help with your customization. On the topic of customization, there’s a lot that can be tweaked. The tuning menu allows you to adjust things such as steering lock, force-feedback strength, shock, ABS, drift mode, force, spring, damper, and force effect intensity. Your experience with the Podium DD1 will be completely different from that of your friends thanks to the myriad of little things you will be able to configure differently.

All of these options and many more are also present in Fanatec’s PC software, which is available as a free download on the Fanatec DD1 product page:

Making tweaks in this way allows for use of a mouse and keyboard, which is considerably easier and more intuitive than using the screen on the wheel base – though we’re very happy that Fanatec decided to include that option as not everyone has access to a PC. It would be quite frustrating to use your Fanatec DD1 on an Xbox console and not be able to modify your direct drive wheel base!

The inputs you will feed your simulator or game will never suffer from any latency when using the Fanatec Podium DD1. The integrated electronics within the wheel base housing promise the immediate exchange of information with your game. In turn, this means that your every minute move will be read by the game, and every little speck of dust under the wheel of your car will be felt by you in turn via force feedback.

Being a high-end product we start to reach relatively expensive costs. It’s nearly triple the cost of the ClubSport V2.5, and in line with other leading direct drive wheel bases such as the Accuforce V2 and the Simucube Sport. It’s not exorbitant, but it isn’t exactly “entry level” either. Note that each region’s version of the Fanatec website has different pricing, as well as different bundles and varied availability of some wheel bases and other products.

The build quality of the Fanatec Podium DD1 is extraordinary. And the quality of the outside materials directly translates to what we can find inside. Fanatec’s engineers designed the first-ever direct drive servo motor optimized for racing simulators. Simply put, everything from the biggest components to the smallest screws has been chosen for its quality.

Fanatec brings a lot of their engineering prowess and design sensibilities to each of their wheel bases, and the Fanatec DD1 is no exception. The innovative quick release system, for example, allows for most Fanatec wheels to be hot-swapped any time you like. The aforementioned OLED display can be customized via the FanaLab software which can be found on the Fanatec website.

With a force feedback motor that outputs 20Nm torque at peak and sustains upwards of 15Nm, it is important to consider the implications of the Fanatec DD1 motor’s strength; after all, a real race car won’t even output so much power to the user’s hands! The wheelbase thankfully requires a torque key in order to be fully unlocked, and a low-power mode is engaged otherwise. A kill switch would have been a welcome addition here (a misstep that was rectified with the DD2) but users can adjust the torque via PC software or using the menus on the OLED display on the wheel base. Fanatec does have a kill switch available for purchase on their site for those that would like to be extra cautious, and we think the additional cost is a small price to pay for peace of mind if you intend to allow children to use your Podium DD1, or if you’ll be using it commercially.

As with all Fanatec wheel bases, the Fanatec DD1 has access to a wide range of the company’s fantastic wheel rims. While the base DD1 package doesn’t include a wheel rim, Fanatec does offer a number of DD1 bundles that include a wheel rim and sometimes other gear such as shifter paddles; these bundles tend to be region-specific, so check out the “Racing Wheels / Wheel Bases” section of Fanatec’s site to see if there are any available to you.

While not endemic to the DD1, access to native use of Fanatec’s other fantastic sim racing accessories is a huge consideration when taking a plunge on an investment such as the DD1. While you can of course cross the aisle and grab some peripherals from Thrustmaster or Logitech to pair with your DD1, it’s hard to argue against amazing pedal sets such as the ClubSport Pedals V3 and CSL Elite Pedals LC, the ClubSport Shifter SQ V 1.5 and even the ClubSport Handbrake V 1.5 that all add up to make an amazingly realistic sim racing experience.

Here are some of the alternatives worth considering: This wheel base definitely has its improvements, but we don
Check Price on Fanatec

The new and improved Fanatec Podium DD2 (full review here) is definitely worth considering if you don’t mind spending a little extra money for more power and features. It offers a little more torque than the Fanatec DD1 and a few other upgrades – such as an integrated kill switch, as well as an improved quick release system for swapping out steering wheels on the fly. From a value for money perspective, we still however think the Fanatec DD1 is a better buy than the Fanatec DD2. If both the wheel bases from the Podium series are outside your budget, the ClubSport V2.5 is a great alternative, although it not direct drive
Check Price on Fanatec

A less expensive wheel base in their lineup, the ClubSport V2.5 remains an excellent option. Its many features range come at slightly more than half the price tag of the Fanatec DD1. If you’re looking for your first wheel base purchase then consider the V2.5. This might just be the DD1
Check Price on SimXperience

It should come to no surprise to anyone that the Accuforce V2 snuck its way inside this review as well. It balances torque and torque resolution perfectly, resulting in an unparalleled realistic feel. Perhaps the most impressive addition is the auto-optimization feature which causes the wheel base to change its settings to best mirror your driving style, your driving line, what track you’re on, what car you’re using, how all these interact.

The Fanatec Podium DD1 is an elite direct drive steering wheel with a plethora of great features and a high yet reasonable cost. The same elation you felt when switching from a controller to a force feedback wheel you will feel once again when you pick up a direct drive wheel with the pedigree and achievements of the Fanatec DD1. If you have some money to spare then it is imperative that you at least look at the Fanatec DD1 and its older brother the DD2