The Fanatec Podium DD1 and Fanatec Podium DD2 are both top-rated products in our guide to the best direct drive wheel bases on the market. Although the DD2 is the successor of the DD1, Fanatec continues to manufacture both wheel bases today, which begs the question: what are the differences and which of the two should you choose?

The most important differences between the DD1 and DD2 are power and price. Although the DD2 produces 5Nm more of torque, it costs an additional $300. When it comes to value for money, we think the DD1 is the better choice for most sim racers.

Fanatec Podium DD1
The DD1 is almost as good as its bigger brother, but it
Check Price on Fanatec

Read on for an in-depth comparison of the two, including their similarities and other minor differences.

Podium DD1 vs DD2: The Differences

Let’s start by looking at the exact differences between the DD1 and DD2. As mentioned above, the main differences are power and price. Other minor differences include the kill switch, cover plate, and warranty.

In order to provide force feedback, sim racing wheels are built with motors which turn based on what’s happening in the sim. In a direct drive wheel, unlike a gear-driven or belt-driven wheel, the motor is attached directly to the wheelshaft. Although this vastly improves realism, it means that strong motors are needed to generate a realistic amount of force feedback.

This brings us to the first main difference between the Fanatec DD1 and DD2: the power, or torque, their motors can generate.

The DD1 can put out a continuous 15Nm of torque, maxing out at up to 20Nm of torque during particularly violent movements. The DD2, however, can put out 18Nm of torque, and only maxes at a whopping 25Nm of peak torque. That’s right: when needed, the DD2 can generate 25% stronger force feedback than the DD1. 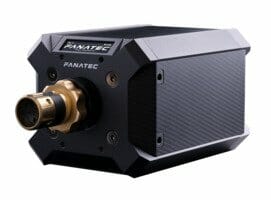 Fanatec Podium DD2
Other than the cosmetic upgrades and kill switch, the DD2
Check Price on Fanatec

Although the DD1 and DD2 wheel bases feel very similar in about 99% of sim racing situations, it’s that last 1% — when you clip a kerb, crash your race car, or just lose control — that you’ll really be able to tell the difference between the level of torque offered by these wheel bases.

The other main difference, and perhaps the one that swayed us the most when having to decide whether the Podium DD1 or DD2 is better, is the price.

Although the DD2 is a fantastic piece of equipment, it costs an entire $300 more than the DD1. This makes it considerably more expensive than other great direct drive wheels like the Accuforce V2, and roughly puts it in line with top-of-the-range competitors like the Simucube 2 Sport.

With that said, the DD1 isn’t cheap either, also costing more than an Accuforce V2 and roughly double a ClubSport V2.5 goes for. That being said, the difference in utilizing a DD1 and ClubSport V2.5 is enormous. With a DD1 wheel, you’re assured you’ll have absolutely no latency, immense levels of customization, unparalleled force-feedback, a sturdy and long-lasting build, and years of support from Fanatec. It’s expensive, but it’s easy to see what justifies this large price difference.

When you compare the DD1 and the DD2 you simply can’t say the same. Yes, the DD2 is better, but it isn’t so incredibly better that you’re ready to spend so much more on it. From a purely pragmatic cost-quality ratio the DD1 is the clear winner.

Moving onto more minor differences, a much appreciated addition in the DD2 wheel base is the two-in-one kill switch and remote power button. What with the significant increase in peak torque, Fanatec engineers decided it would be worth adding a kill switch for safety purposes. This big emergency stop button allows you to instantly switch off the wheel base from at any time. If your force feedback is turned up to 100% and you’re heaing straight for a wall, this swich will save you a visit to the doctor.

As mentioned, the kill switch also doubles as a remote power button. If you’ve ever used the DD1 before, you’ll know that power button is located at the back of the wheel base, which can be a pain to reach in some sim racing rigs. However, with this new kill switch, you can turn your DD2 on and off in a place that’s more convenient for your setup. From a feature set perspective, this is a big plus.

Another minor upgrade for the DD2 is the newly designed cover plates. While the DD1 was clad in brushed aluminium plates, the DD2 instead uses carbon fiber plates. This makes the wheel just slightly lighter, but the bigger benefit is the sleek aesthetic of the carbon fiber. Needless to say, carbon fiber make this wheel base look like something out of a real race car.

Last but not least, it’s worth knowing that the two Podium direct drive wheel bases are offered with slightly different warranties. While the DD1 comes with a standard 3-year warranty, the Fanatec DD2 has an extended 5-year warranty. For both models, the warranties cover the entire wheel base, although they’re mainly there to cover the longevity of the servo motor.

Now that we’ve covered all of the main differences between the Fanatec Podium DD1 and Podium DD2, you probably want to know what the similarities are… and when it comes to design, build quality, and compatibility, these wheel bases are indeed very similar.

Both generations of the Podium direct drive series are incredibly sleek. They’re hefty, black metal boxes with only nominal changes between the two iterations. The DD1 has the brand name on its wheelbase, the DD2 does not. As mentioned earlier, the DD1 has aluminium cover panels, while the DD2 has carbon fiber cover panels.

Both the DD1 and DD2 have excellent build quality. Let’s start with the force feedback quality: by default, the force feedback is strong, responsive, and immersive. You will feel like you’re driving a real race car. This is not all, however, as through the tuning menu you’re allowed to adjust force feedback levels and all functions that go alongside it, from steering lock, shock, ABS, drift mode, force, spring, damper, to force effect intensity.

The DD1 was the first direct drive wheel to have engineers design a servo motor specially made for racing simulators. Every little screw, every single material choice was made for a reason, and they are built to last. Obviously, the same goes for the DD2.

If you are on PlayStation, you’ll be delighted to know that Fanatec does have a direct drive racing wheel that will work for you. It’s called the Podium F1. Built with the DD1 wheel base, this all-in-one steering wheel (which includes a licensed F1 rim) works on PlayStation thanks to a collaboration with Sony. 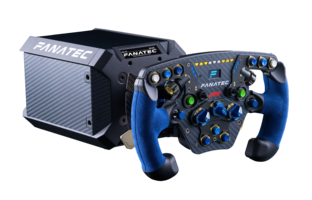 Fanatec Podium F1
Thanks to a collaboration with Sony, you can enjoy the DD1
Check Price on Fanatec

Since it’s built with DD1 hardware, this top of the range racing wheel has all the specs of that wheel base, like the peak torque of 20Nm, the display, and the rim quick release system.

As stated before, a newer, upgraded product is sure to have more powerful and impressive specs compared to an older model. This holds true when comparing the Fanatec Podium DD1 and DD2. But, while these ameliorations to the DD2 are welcome, they are also very expensive. Too expensive for us to be able to recommend you to buy the DD2. If this is your first (and even if it’s not) purchase of a direct drive wheel, the DD1 will leave you incredibly satisfied.

The Fanatec Podium DD1 hits all the nails on the head when you’re looking for a powerful direct drive wheel base. Immersion, power, realism and build quality are all more than present in this great product.

Fanatec Podium DD1
The DD1 is almost as good as its bigger brother, but it
Check Price on Fanatec

Does the Fanatec DD1/DD2 work on console?

Both products work on Xbox, but not on PlayStation. For PlayStation sim racers, Fanatec instead offers the Podium F1 racing wheel, which is built on the DD1.

What games does the DD1/DD2 work with?

Is the Fanatec DD1/DD2 worth it?

If you’re looking for an entry-level direct drive system, the DD1 is absolutely worth it. We would say the same about the DD2, although the $300 increase in price definitely makes it “less” worth it!

What is a direct drive steering wheel?

A direct drive steering wheel is a sim racing wheel where the motor is connected directly to the wheelshaft. This makes the force feedback stronger, smoother, and more immersive.