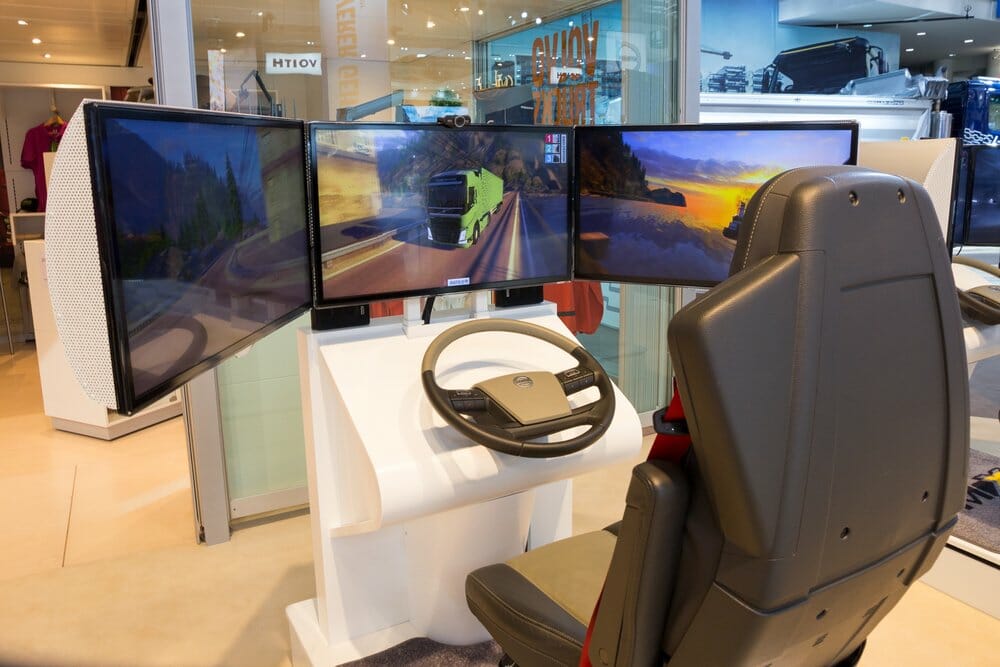 If you enjoy trucking sims, a good steering wheel is one of the best investments to make after a crisp monitor. Thankfully, seeing as you (hopefully) aren’t taking corners at breakneck speeds, the best wheels for trucking simulators can be a lot cheaper than the best ones for racing simulators, as you won’t need a lot of the extra features that those wheels offer.

After thorough research, we’ve compiled a list of the best steering wheels for truck simulators out there, making your task to pick substantially easier!

Thrustmaster TMX/TMX Pro
The top pick for our list of best truck simulator wheels is fantastic for both racing and transporting goods.
Check Price on Amazon

The Thrustmaster TMX/TMX Pro is a mainstay in many wheel-related articles. Here are our thoughts regarding it as a trucker wheel.

The TMX/TMX Pro, utilizes a mix of both belt and gear force feedback systems, allowing for a smooth feel when driving, which is supplemented by the force that the gear portion outputs. Whether you’re driving on the German autobahn or a small street on the outskirts of Bristol, this wheel will faithfully reproduce the asphalt (or lack thereof) under your tires, and react to your steering wheel adjustments.

It’s not the prettiest wheel on the market, but that shouldn’t put you off. The build quality is quite good, as it’s made of robust hard plastic, and feels as though it can take quite a bit of punishment. Its rotation range is the 900° needed for an authentic feel.

The last point to consider is why we’ve included both the TMX and TMX Pro. The normal TMX model comes with a pair of pretty awful pedals. As a start there’s only two of them, meaning that you can forget about the clutch. The break doesn’t get stiffer as you press down on it, again detracting from the realistic feel. If this isn’t a deal-breaker for you that’s okay, but wait until you look at….

The Pro set, which comes with the incredible T3PA pedals. These fix all of the faults of the normal set, from the stiffness to the case of the missing clutch. What’s more interesting however is that, on occasion, you can find the TMX Pro bundled with the T3PA for a cheaper price than the basic model, which is a fantastic steal!

All in all, whether you’re looking for a wheelset solely for a trucking sim or a more versatile wheel you can couple with some racing games, the TMX Pro is a solid choice! 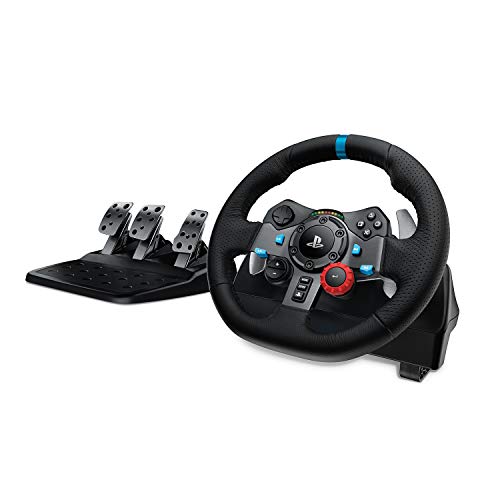 Logitech G29/920
This is the wheel that pops up on every list of best steering wheels, and it’s easy to see why.
Check Price on Amazon

The Logitech G29/920 is a mainstay in many sim households, whether they be racing sims or trucking sims, and for good reason. At a reasonable price, you get a good looking and well-built steering wheel. It’s made of steel with an actual leather cover, which are features even more expensive wheels often don’t offer. Handling it is not only comfortable but you immediately get immersed in whatever you’re playing. Its rotation range is 900°, which is just right to make you feel like you’re taking control of an actual heavy-duty vehicle. The force-feedback is powerful but more rugged than the ones of many other wheels you can find on this list. It will be notchy on occasion, but since you shouldn’t be pushing it too hard, the effects shouldn’t be as noticeable as if you were speeding down Silverstone.

The G29/920 also comes with a set of decent pedals that offer up to 256 registerable positions, look pretty and grip both your foot and your floor admirably. This is a well-rounded set that includes both a good wheel and good pedals for a reasonable price.

As a last note, the only difference between the G29 and the 920 is the console they operate one (the PS4 uses the G29, and the Xbox the 920). If you plan on playing on PC then have no worries, as both will work!

The Thrustmaster T150 can be a truly fantastic wheel. Let’s start with the positives. The T150 has an above-average rotation range of 1080°, which is more than some incredibly expensive luxury wheels can say. It’s also slightly larger (11”/28cm) than most wheels, making driving with it more comfortable and intuitive. It has incredibly powerful force-feedback delivered via a mix of belt and gear systems. For racing simulators, it can get a bit more notchy when taking hard turns, but for trucking simulators, we’d be surprised if you ever noticed it.

There are also some negatives, however. The build quality of the T150 is not great, as it’s made from hard plastic and rubber. It’s hard to talk poorly about a free addition, but the T150’s pedal set is disappointing. It’s the same as the one in the base TMX set: flimsy, unattractive, clutchless… 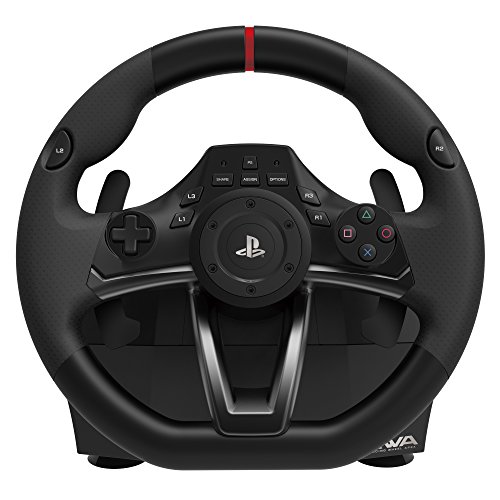 Hori Racing Wheel Apex
This wheel doesn’t have force-feedback, but it executes everything else wonderfully and for a very cheap price. If you simply can’t afford any of the other wheels, then give this one a look.
Check Price on Amazon

The Hori Racing Wheel Apex is very accessible but doesn’t feel like it’s inexpensive. The build quality is excellent, utilizing only high-quality materials. It’s also very customizable, with multiple programmable buttons and functions. Finally, it comes with an included pedal set. It’s not excellent by any stretch of the imagination, but to include anything extra for such a low price is a great deal, especially if you want to round out a more complete, low-cost, set-up.

The main drawback of the Hori is that it doesn’t have force-feedback. This is less important for trucking simulators but is still a noteworthy loss. You won’t feel the road under your truck through the wheel, detracting a bit from the realism and authenticity of the experience. Nevertheless, the Hori Racing Wheel Apex does try to mitigate this loss with powerful vibrations. These aren’t the same, but they will still feel a lot more authentic and engrossing than a controller or a keyboard.

As a final note, this wheel only works on Playstation and PCs, so if you were planning on coupling it with an Xbox, you might have to search elsewhere on this list. 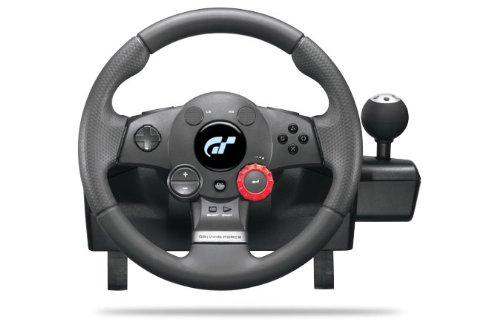 Logitech Driving Force GT
A great entry-level wheel, the Driving Force GT should satisfy most your needs and add a flair of realism to your trucking experience
Check Price on Amazon

The Logitech Driving Force GT is not a perfect wheel, but it’s a solid choice nonetheless. It’s very sturdily built, meant to withstand a lot of playing sessions and a lot of punishment. Despite being made from rubber it inexplicably feels quite nice too. The same can’t be said of how it looks, as compared to some other wheels on this list it’s a bit of an eyesore. Still, it has solid force-feedback and a 900° rotation angle, hitting all the main requisites on the head!

If you want to use all of those 900° however you need the appropriate Logitech utility to take set it up on a PC, making it quite a hassle. Some simulators also don’t support the buttons or recognize the shifter, so there’s a decent chance that if your truck sim came out after this wheel it might face some issues.

What to Consider When Buying a Steering Wheel for Truck Sims

You’ll more than likely going to be spending a fair amount of time on the road, making ergonomics a crucial factor in deciding what wheel to pick. They shouldn’t just be well built, but also well suited to be used for a long amount of time without being uncomfortable.

Rotation Range what differentiates between how an arcade wheel and a simulator wheel feel. If you have to turn the physical wheel more than what the in-game sim asks of you, it will detract for the authenticity. You’ll no longer be feeling like you’re driving on the road, which is the entire purpose of the experience. We recommend looking for wheels that offer 900° or more of rotation range. Anything extra is a welcome bonus, but 900° is the magic number.

Force-feedback is how the wheel behaves vis-à-vis your actions and what is happening in the trucking sim. It tracks and opposes your movements by applying force depending on the conditions of the road. Of course, this isn’t as crucial here as it would be in a racing simulator, but it’s still a very welcome factor, as it adds to the realism of your experience. Mind you, force feedback is not the same as vibrating. Force-feedback tries to replicate the feelings an actual wheel would have in that specific situation. Vibration is inferior as it only shakes the wheel around.