It’s hard to believe how far virtual reality has come in a few short years!  From improved displays, controls and tracking – not to mention innovations in movement and sickness reduction – VR is well on its way to mainstream adoption.  Perhaps most importantly, prices have decreased to the point that great headsets are now available at prices that most consumers can stomach!  The following are the best examples of great VR headsets under $300!

The Top-Rated VR Headsets Under $300

Got more to spend? See our guide to the best VR headsets under $500.

The Oculus Quest 2 follows-up on the promise of its predecessor by improving in a number of impactful ways – perhaps none more important than the improved display that features a whopping 50% more pixels!

This simple, yet comprehensive package comes with everything needed to get started in style – headset, controllers, cables and even built-in 3D speakers.  All that’s needed is a sufficiently powerful PC, and you’re ready to enter the world of VR!

If you’re ready to get lost in truly immersive gaming experiences at a reasonable price – and you do have the aforementioned PC hardware, there’s no better start than the Oculus Quest 2!

The Sony PlayStation VR is a great headset for gamers who don’t have a gaming PC – but do have a Playstation 4 console!  It may come as a surprise to some that the experience rivals that provided by much costlier PC setups – but you’ll likely be too busy gaming to think much of it once you strap-in!

Included in the package is almost everything needed to get going – the headset, adapters and cables are joined by a demo disc of awesome games and experiences.  The set doesn’t include a Playstation controller, but chances are good that anyone considering this headset already has one!  Many games are also compatible with the PS Move motion controllers – which are also sold separately.

While PSVR isn’t quite on-par with the higher-end PC VR experiences, it is genuinely amazing for the price, and shouldn’t be dismissed by anyone who already has a PS4!

The Oculus Quest may not have some of the upgraded features included in the second-generation hardware that just launched, but it still does a wonderful job of introducing gamers to the world of VR – and now does so at a dramatically reduced price!

Many retailers are still sitting on a large supply of original Oculus Quest headsets, and are going to great lengths to liquidate stock – some may argue TOO great lengths considering that the OG unit still packs a punch.

Perhaps best of all, the first Quest has lower system requirements, allowing gamers with older/less powerful PCs to get in on the action!

The Oculus Go is the ideal VR headset for those who don’t have a gaming PC or video game console, as it has a mini computer built into the unit which does all of the work typically offloaded to more powerful hardware.

Powered by a Qualcomm Snapdragon processor – like those used by high-end cellphones – the Oculus Go is able to provide a great introductory VR experience without complicating matters or breaking the bank.

If you want to get into quality VR experiences at the absolute lowest price point, this is your best bet! 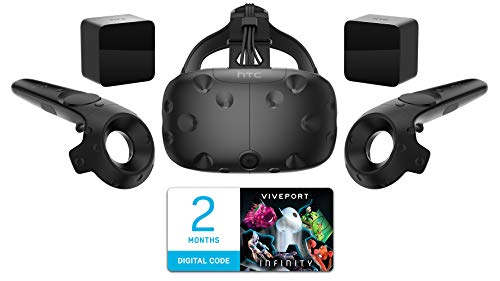 The HTC Vive is the ultimate gateway to hardcore gaming in VR as it’s the first (and most affordable) headset to be released with the Steam PC gaming platform in mind.  This means it has access to the widest array of games out-of-the-box, many of which are exclusive to the platform!

While you won’t be getting additional hardware such as controllers or motion tracking at a sub-$300 price point anytime soon, most games are playable in VR while using your existing keyboard and mouse – or controller- allowing you to ease-into VR gaming one piece at a time!

For those who think this is just the beginning of something bigger and better, the HTC Vive is the ideal starting point!

There are an ever-increasing array of VR headsets coming onto the market, each with its own set of perks and qualifiers that make it ridiculously hard to even know where to start.  Not to worry – the following are all you really need to focus on:

Do you have pre-existing hardware?

The most important thing to consider is:  what are you going to hook this headset up to?  If you have a gaming PC, that will undoubtedly be your best choice.  If not, but you do have a PS4, you can still have a great VR experience!  Many mobile headsets are worth considering, but at a lower price point.  Most standalone headsets are less-than-desirable, but the Oculus Go is definitely worth a look as well!

How much of a gamer are you?

This may sound like a silly question to ask – especially considering that VR may very well be the thing that turns you into a gamer in the first place – but it’s an important consideration!  Serious gamers may already have a massive library of games on Steam that support VR; for this group, HTC VIve is the unequivocal way to go.  For those who aren’t serious about gaming, but nonetheless want a great experience, Oculus Go is a great low-barrier point of entry!

Do you want to do more than just game in VR?

More and more companies are bringing non-gaming experiences to VR and if that interests you, it’s important to consider that before you make your big purchase!  PSVR will exclude you from a lot of content, as will Oculus Go as these units won’t have wide access to the free web.  Due to those sets’ closed nature, many apps, movies and websites simply won’t be accessible.