The Nintendo Entertainment System was the first major hit from the seminal video game console manufacturer, and it’s revered to this day for it’s massive library of amazing games.  Said library is now available on just about every imaginable computer device and all you really need to get started is a USB NES controller.  That being said, the following is a list of the best USB NES controllers available today! 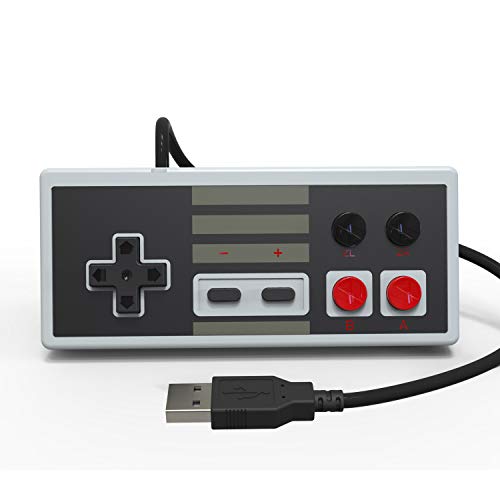 Simple, clean and loved by tons of verified buyers

The Delta Essentials NES does what most USB NES controllers set out to do – provide a great NES emulation experience on as many platforms as possible – and does so with fantastic efficiency.

This simple product does everything you’d want tosses-in a couple of extra buttons for good measure.  Another great little bonus is the attached 10 foot USB cable, assuring you can sit far away from the screen without pulling your console – erm, computer – to the floor!

If you want a great, reliable pad for your NES gaming needs, this is a great pick! 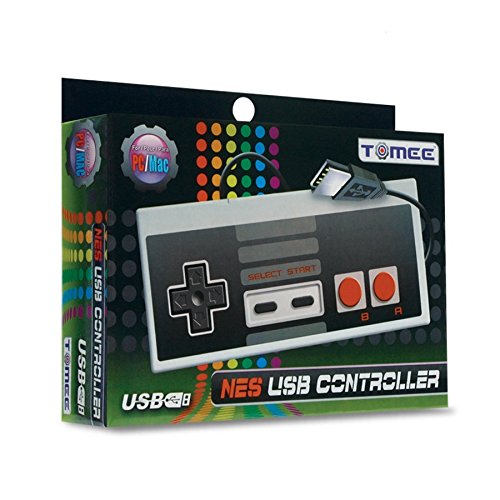 This controller is practically free!

The Tomee NES USB is a solid USB NES controller that sets itself apart from the packed field of competitors by doing something that borders on inadvisable – it’s almost free!  That may be something of an exaggeration, but when one factors in the shipping costs and merchant cuts, Tomee can’t possibly be pocketing more than a few cents in profit on this one!

Thankfully, this pad looks, feels and performs considerably better than it’s no-budget price would suggest!  If you’re in the market for a controller that doesn’t make much of a dent in your wallet, this one is an absolute no-brainer! 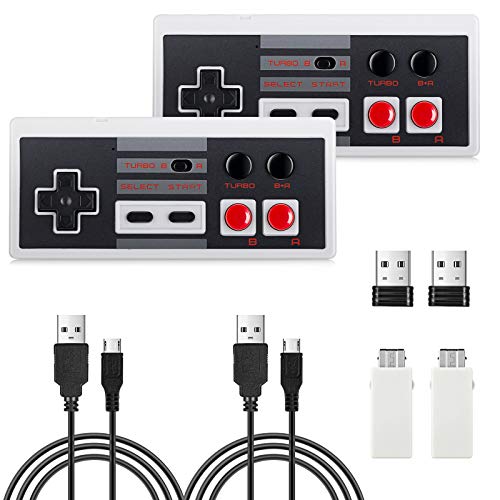 Freedom is the ultimate luxury option

The AGPTEK NES 2-Pack is a great option for those who don’t mind spending a few extra bucks in favor of wireless multiplayer functionality.  Modern gamers or those accustomed to the freedom of wireless tech shouldn’t have any trouble making that tradeoff!

All of the other features you’ve come to expect make the list as well, and it is probably fair to say that there aren’t any especially good reasons to skip out on this package aside from preservation of the authentic cabled experience of years past.

Save yourself the trouble and grab this great bundle! 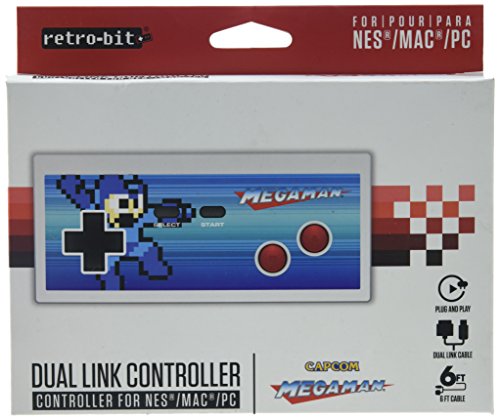 The Retro-Bit Mega Man NES is one of those products that tells you exactly what you’re getting right in its name.  The long and short of this proposition boils down to this:  a great USB NES controller emblazoned with an image of Mega Man.

This controller features a bare-bones NES controller layout and is officially licensed by Capcom.  If this simple proposition gives you fuzzy feelings, you may as well give in and grab one of these limited-edition pads while you still can! 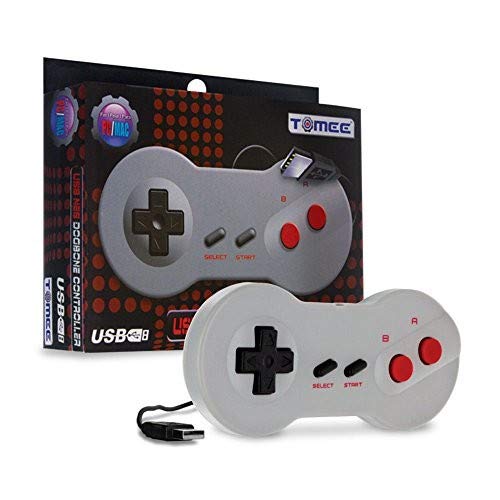 It’s amazing how much more comfortable this is!

The Tomee USB Retro-Style Dogbone is a great USB NES controller for those who want all of the authentic functionality of a classic NES controller – but without the awkward rectangular design that’s been cramping hands and stabbing heels since the dawn of home console gaming!

While the previous statement may be a but hyperbolic, it’s no stretch to say that the Tomee USB Retro-Style Dogbone is a dramatic step in the direction of ergonomic consideration, and as such it’s worth your consideration as well!

What to Look for in a USB NES Controller

While the NES controller is a relatively simple device, there are nonetheless a few points to consider when shopping:

While the majority of modern USB NES controllers endeavor to at least approximate the look and feel of the classic pack-in pads, some have unique designs that tend to cater to gamers with large hands or modern sensibilities.  If you prefer an authentic experience, go with the classic thin rectangle sticks; otherwise opt for something a bit more ergonomic!

Make no mistake – USB NES controllers are about as cheap as good gamepads come!  That doesn’t mean there’s not potential to overpay, so make sure you stick with one of the products on this list to ensure you’re getting a great deal!

The NES controller has dramatically fewer buttons than modern controllers, and as such you shouldn’t expect to be using your new pad for much outside of NES game emulation.  That said, if you do intend to buy a controller for use with other games, consider something that works across classic platforms.

Here are some of the most common questions users ask when choosing a USB NES Controller:

Absolutely! The list of great reasons to pick up one of these classic pads is virtually endless, and “everyone is stuck at home” is arguably the greatest reason in the history of mankind to grab a pad (or two) and play some games with friends and family!

Why are USB NES controllers so inexpensive?

There are a number of factors that contribute to the lower-than-most pricing of the products listed here. Chief among them is that fewer buttons equals fewer components, and therefore lower costs associated with production.

Other USB NES Controllers We Reviewed

We looked at two other USB NES Controllers. Even though they didn’t make our top 5 list, they’re still some of the market’s best. 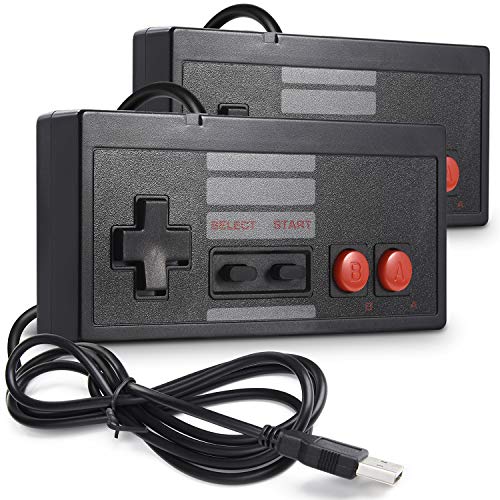 The Miadore NES 2-Pack is among, if not the best value package on this list.  The coolest thing about these wired controllers is black-on-black color scheme that somehow manages to retain the classic NES aesthetic while also looking like something Darth Vader would keep in his pocket!  If you want a couple of awesome looking controllers for your USB NES needs, it doesn’t get any cooler than these! 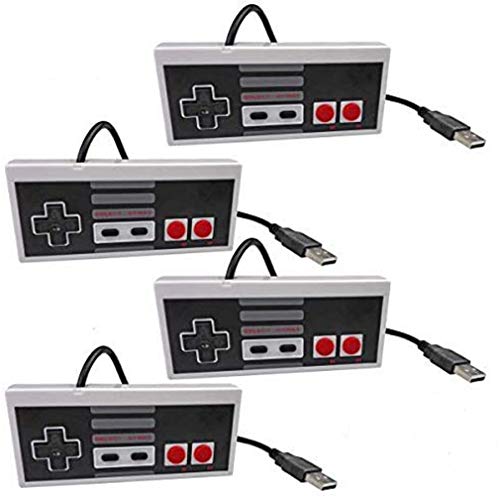 Okay, this might be an even better deal!The Mekela Classic NES 4-Pack is an amazing deal that trumps everything else on this list, but only in a very specific circumstance – you intend to play games that allow for three or four players.  Very few NES games featured more than two-player multiplayer, and fewer still were popular.
If you’re aiming to play Bomberman with your family though, this is as good as it gets!