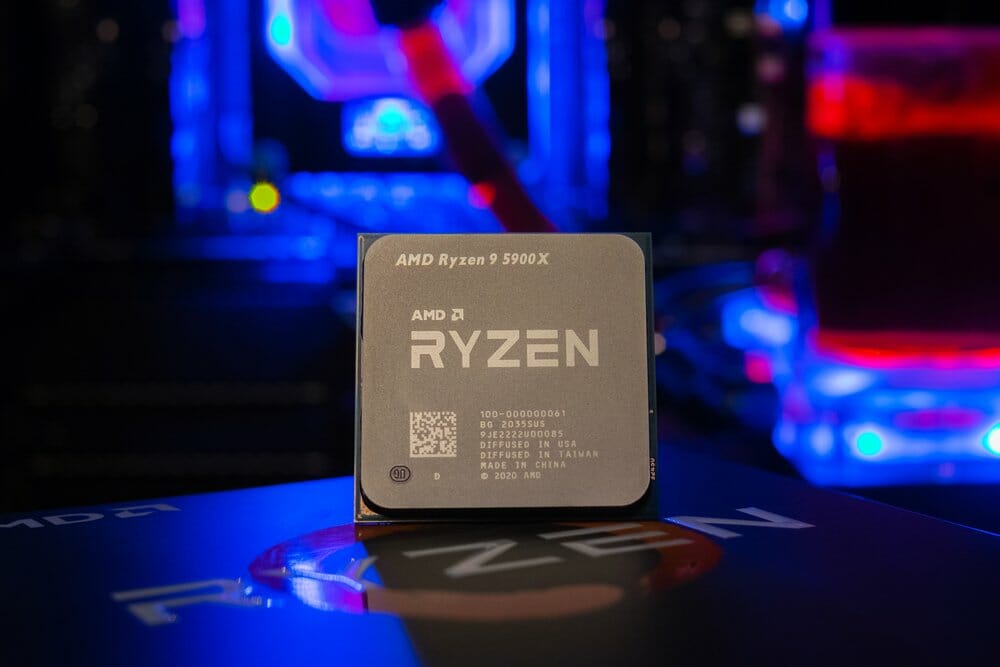 If you’re looking to build a new gaming PC, or upgrade your existing rig, to enjoy your favorite VR games, then you should think about what CPU you’ll be using. VR gaming is more taxing on your system than regular gaming, therefore you need solid hardware to play without problems. Below you’ll find some of the best CPUs for VR, at different price points, that will enhance your overall gaming experience.

The Top-Rated CPUs For VR

This high end CPU from intel is made to fit all your VR gaming needs.

The Intel Core i7 10700K, is one of the best CPUs for VR gaming on the market. Intel is known to provide the best performing CPUs in the gaming department and this one is no different. You’ll need a decent cooler to unlock its potential, as it doesn’t come packed with one.

The i7 10700K keeps the 14nm architecture, but adds hyper-threading compared to the previous generation, with 8 cores and 16 threads. This, combined with a whopping 5.1 GHz of single core boost and a stable 4.7 GHz boost on all cores, ensures the best performance for your VR setup, with no issues.

Intel’s ability to equip the 10700K with the extra threads over its predecessor, while achieving the aforementioned high core boost on two cores simultaneously, is partially thanks to the new Thin Die Solder Thermal Interface Material (STIM) which allows for better thermal efficiency and heat dissipation. Overall, the i7 10700K is a great solution for a high end VR gaming PC.

This great alternative from AMD is a versatile and powerful option for your VR gaming PC.

The AMD Ryzen 7 3700x is one of the newest 3rd generation Ryzen CPUs from AMD, which aims to provide a combination of versatility and performance for multitasking and gaming. The 3700x comes with the Wraith Prism cooler included, however if you’re looking to overclock, you should consider a better cooling option.

The 3700x comes with the Zen 2 architecture with a 7nm design. This allows it to pack a higher core count and increased performance with a lower Thermal Design Power (TDP). The 8 cores and 16 threads in total match well with the i7 mentioned above and outperform it when it comes to everyday tasks, or multithreaded applications. However, in VR gaming where single core performance is important, the 4.4 GHz of single core boost in the 3700x are outclassed by the 10700K.

Nevertheless, the performance of the 3700x is more than adequate for most VR users, and the lower price, as well as better versatility can steer some towards AMD in this category. Also, the Ryzen processor has better upgradability and PCI 4.0 support for increased graphics bandwidth.

This affordable CPU is ideal for VR gamers on a tight budget.

The AMD Ryzen 3 3300X is a budget option that packs a lot of power and features for its price. Its focus on performance and high overclocking capabilities give it the edge over its competition. To unlock its full potential, you should pair it with an adequate cooler, as the included Wraith cooler could struggle a bit.

The Ryzen 3 3300X brings hyper-threading (AMD calls it Simultaneous Multi-threading) in the entry level category with 4 cores and 8 threads in total. It also provides fantastic single core performance of up to 4.3 GHz. This allows the 3300X to punch above its category and provide similar performance to its counterparts, especially in budget builds.

The 4 cores of the Ryzen 3 3300X might be on the low side for threaded applications, but in the gaming department, and therefore in VR, it’s on par with higher end CPUs thanks to its high clocks and great overclocking. You can also pair it with a good motherboard for access to PCI 4.0 as well as a solid upgrade path in the future.

If money is not a problem and you’re looking for the best performance for your VR setup, then this CPU is the best for you.

The AMD Ryzen 9 3950X brings enthusiast and professional level of performance to the mainstream, while maintaining a reasonable price. In order to fully explore its overclocking capabilities you need to add a hefty cooling solution to it though.

The Ryzen 9 3950X is composed of two 7nm 8-core chiplets, connected with the Infinity Fabric interconnect via an I/O die at 12nm. All 8 cores on each chiplet are hyper-threaded, making for a massive total of 16 cores and 32 threads.

The 3950x also manages to hit a single core boost of 4.7 GHz very reliably. However, this is affected by cooling, so you should definitely account for proper cooling, preferably a beefy liquid cooler to reach the CPU’s full potential. Overall, the Ryzen 9 3950X provides excellent multitasking capabilities as well as fantastic gaming performance, making it one of the best CPUs for VR gaming setups.

The newest in the i5 line, this CPU packs a lot of power for a sensible price.

Intel’s attempt to provide a competitive option in the mid range category with the i5 10600K is a success, as this well-priced and powerful CPU is a great pick for a great VR build. It packs solid performance, that’s amped by its overclocking potential. Just make sure to provide a decent cooler, as it doesn’t come packed with one.

The i5 10600K’s architecture remains at 14nm, but it introduces hyper-threading to the i5 line, sporting 6 physical cores and 12 threads. This is a huge step for Intel as, until now, hyper-threading was saved for its more expensive models.

What makes the 10600K stand out is its impressive 4.8 GHz single core boost as well as a reliable 4.6 GHz boost to all cores. Coupled with the high core count, and the high overclocking potential, this CPU performs incredibly well for its price, almost on par with the more expensive i7. This makes it one the best CPU choices for a mid range VR gaming PC.

If you’re looking for a great all-round CPU that also performs excellent in VR, then this one’s for you.

The AMD Ryzen 5 3600 is another great value proposition if you want a versatile do it all CPU. This is not a top of the line performer, like some of the aforementioned CPUs, however if you‘re looking for a CPU for your next build that can perform well at whatever you throw at it, including VR, then this might be the one.

The Ryzen 5 3600 is a Zen 2, 7nm chip which packs 6 hyper-threaded cores for a total of 12 threads. It can also output a very respectable 4.2 GHz turbo boost on a single core, that can be amped with some easy, one click overclocking. This combination of features ensures that the 3600 does not lag behind its more expensive counterparts.

All this power comes with a very good 65W TDP, that’s very easy to keep cool, even using the included Wraith Stealth cooler. Also, the 3600 has access to PCI 4.0 for better graphical performance from your GPU. Overall, the value of the Ryzen 5 3600 is unbeatable if you’re looking to build a multipurpose PC that can game in VR with no problems.

What To Look For In a CPU

The two manufacturers have a long-standing battle between them for the best CPUs. While Intel is known for its high end gaming performance, it has been lagging behind AMD in the past few years in the value category. If you’re looking to build a top of the line VR system, then Intel CPUs provide better performance. If, however, you’re looking to build a more value oriented system, or plan to use your PC for more than just VR gaming, then you should definitely consider AMD’s value propositions.

VR gaming can be very taxing on your system. Therefore, it’s recommended to get the best possible components to enjoy a fully immersive VR experience. The number of cores and threads on your CPU is very important as more and more games begin to utilize more cores than before. Also, you should consider the longevity of your system, as you don’t want to have to buy a new CPU in a few years’ time.

One of the most important factors when choosing a VR gaming CPU. Provided it has a good number of cores and threads, a higher base and boost clock speed will make your CPU run faster. There’s also overclocking potential, which can significantly boost your CPU’s performance. However, it requires technical knowledge and a good cooling solution to get the most out of your CPU.