PC Joysticks have come in a variety of shapes and sizes for years, and feature sets are ever-evolving.  One thing that hasn’t changed much over the years is prices, and it can be challenging to find a good one at a good price – which is where this handy list comes in! 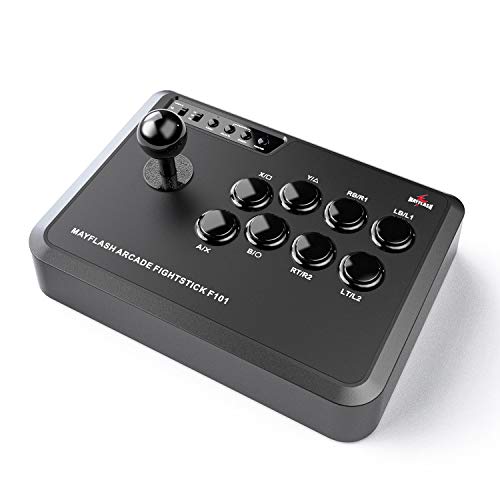 This one really hits the sweet spot

The Mayflash F101 is a highly versatile and well-built little arcade stick that comes in at a great price point and does everything you might need it to do.

Key features include turbo functionality, compatibility with various consoles and swappable button switches in case you decide you want to upgrade at a later date.

The Mayflash F101 also features an understated design that doesn’t stick out, nor look underwhelming in any way – making it easy to recommend to pretty much anyone! 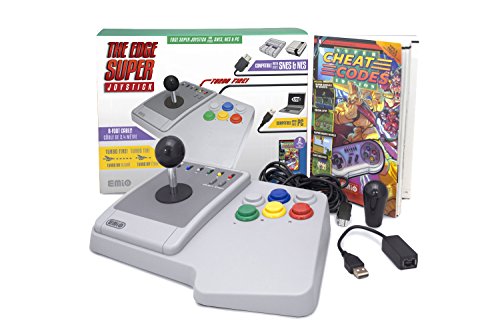 As cheap as good joysticks come

The Emio Edge Super Joystick is a great joystick designed for use with the SNES Mini as well as PC, and it’s super affordable!  Featuring 6 fully-programmable turbo switches, and an extension cable, it’s fair to say this stick is pretty bare-bones in terms of features but it does what it does admirably.

Verified users confirm that, despite stated compatibility, it also works with NES Mini and Raspberry Pi, right out of the box!  If you’re looking for a great, cheap little joystick, this is a great place to start! 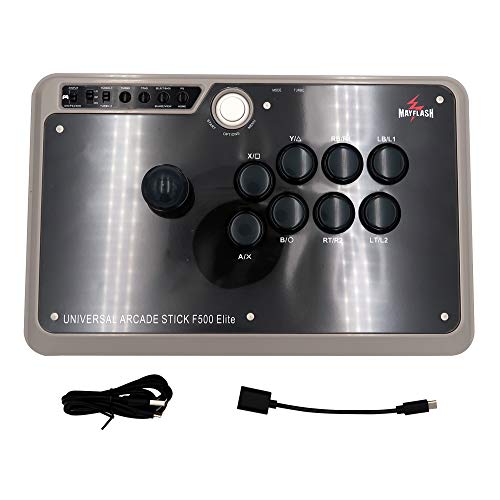 Luxury on a budget?  Yes!

The Mayflash F500 straddles the line between being a high-end joystick and something more native to a list such as this one quite well.  While it’s a bit more expensive than the other entries here, it still comes in at a reasonable price point while offering a smattering of high-end features such as audio passthrough, programmable turbo switches, optional USB-C cable and swappable analog stick/d-pad.

If you find yourself looking for something a bit higher-end than the rest of the products on this list, but are still quite price-conscious, the Mayflash F500 is a great option for you! 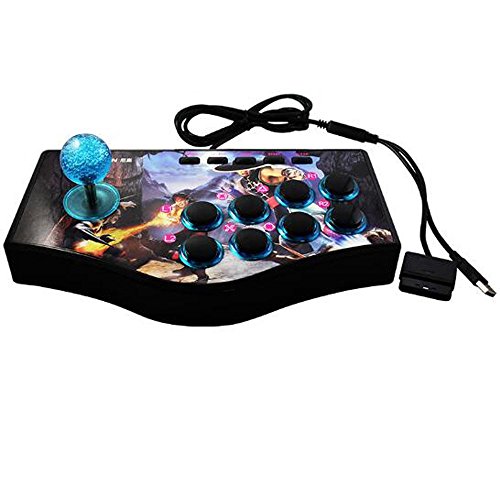 A great stick for those who miss arcades

The SUNCHI 3 in 1 is a solid joystick that works with an array of consoles, including the Playstation 2 in addition to all of the usuals you’ve come to expect due to the ubiquity of USB ports.  The feature set included is quite similar to the others on the list, so it’s best to focus on what makes this one stand out from the pack – it’s classic arcade cabinet styling.

Big, bold buttons sit atop an acrylic-topped body and the joystick is a big, bubbly blue ball that looks like something straight out of the arcades!

These aesthetics aren’t going to please everyone but if you like what you see, this is a great stick that shouldn’t be overlooked! 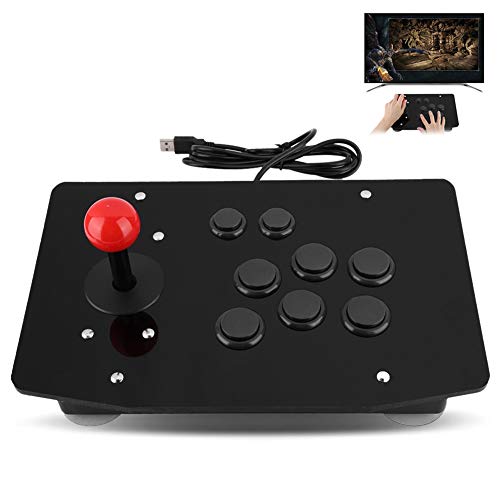 Unbelievable looks, especially for the price

The Tangxi Fighting Stick looks like a joystick that would cost twice as much as it does (or more) due to it’s great build quality and super-clean aesthetics.  Tangxi actually took things to the next level here and removed all markings from the controls which gives the stick a futuristic and clean look.  Some gamers are sure to find this lack of marking to be a detriment, but most will be able to quickly remember which of the programmable buttons as which.

In addition to stand-out looks, this stick does feature a great range of features sure to satisfy all but the pickiest of players – such as a full acrylic shell, massive suction cups for secure footing, and replaceable buttons.  Overall, this is a great joystick at a surprising price point!

What to Look for in a Cheap Joystick for PC Gaming

Finding a good, cheap joystick is going to be a matter of understanding and using the following to your advantage:

As “cheap” is the main qualifier here, price is going to be the primary consideration.  Of course, price is relative, so bear in mind when shopping that it’s unlikely you’ll be able to find a worthwhile PC joystick at a trivial price point.

Expensive joysticks come loaded with features that hardcore games crave; most of said features are of questionable value to the average gamer, and this list aims to point out the joysticks that save money by removing frills rather than lowering build quality

It’s worth noting that the vast majority of PC joysticks will be compatible with an array of consoles as well, and vice-versa.  You can often save a few bucks by buying joysticks branded for use with deprecated systems – but they still work great with PCs!

Here are some of the most common questions users ask when choosing a cheap joystick for PC gaming:

Why buy a joystick instead of a controller for PC gaming?

Fighting games, platformers and arcade games tend to benefit greatly from the button layout and and spammability of big buttons. Controllers on the other hand, are more conducive to playing games that require a more compact button layout and analog sticks.

Are cheap joysticks a good value?

It really depends on what you intend to use the joystick for and how much use you hope to get out of it. Higher-end joysticks tend to be made of sturdier materials that stand up to wear and tear much better, but those sticks aren’t worth the additional cost if you aren’t going to be using them on a regular basis! The joysticks on this list should all be a great deal for any casual or mid-core gamers.

Other Cheap Joysticks for PC Gaming We Reviewed

We looked at two other cheap joysticks for PC gaming. Even though they didn’t make our top 5 list, they’re still some of the market’s best. 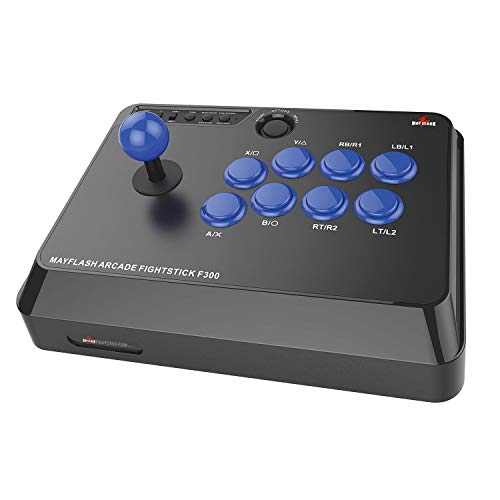 It’s hard to argue with a great value proposition

Truth be told, the Mayflash F300 might deserve a higher place on the list – but it would be unfair to the other manufacturers if Mayflash were allowed to dominate the conversation.  That being said, there is a compelling case for each of their products on this list and the F300 is no exception.

Sitting at a price point and feature set that’s right between the F101 and F500, the F300 is the middle child here but that doesn’t mean it doesn’t deserve some love, too!  Grab this one of the F500 is too pricey and the F101 too “budget” for your tastes. 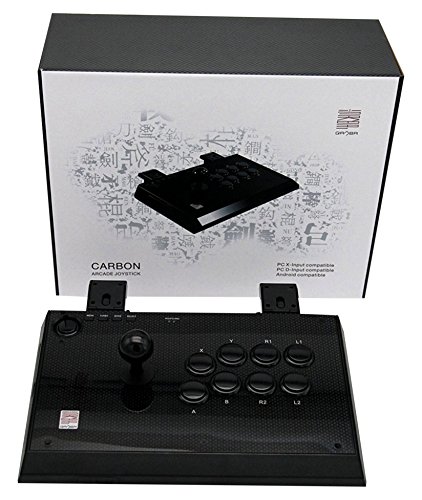 You can never go wrong with Qanba

The Qanba Carbon is the latest budget product from Qanba, a well-known maker of high-end tournament joysticks.  The Carbon is especially great for those who have an awkward gaming setup that doesn’t have a lot of area to spare for a joystick, thanks to the compact design and optional mounting clamps.

Designed for use with PC, Android and PS3, this stick will look at home in pretty much any setup due to a full black on black color scheme.  If you want a smooth, sleek stick that will stand the test of time, this one is absolutely worth considering!